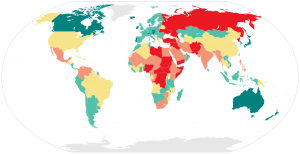 remains unchanged from 2018. Canada is ranked highest on the peace index for all of the Americas.

Canada ranked number six globally and has been in the top ten since the launch of the index in 2007.

In 2019, global peace, as measured by the index, improved, very slightly, but for the fist times in several years.

As for North America, only Canada and the US are comparable and, well, they are in totally different leagues, with Canada ranking No. 6 on the global index and the US at No. 128.

Nonviolence International Canada is an organizational member of the following campaigns